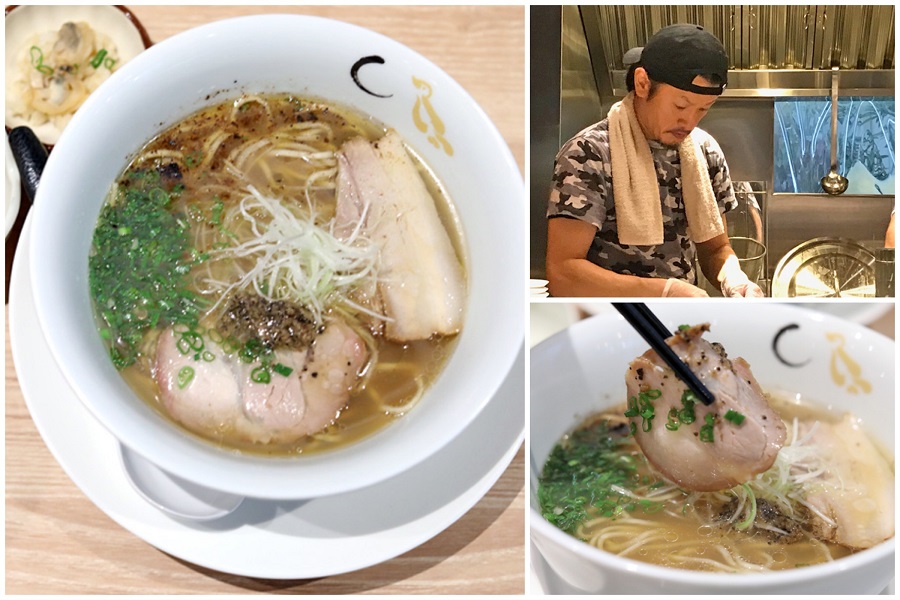 Sobahouse Kiniro Hototogisu 金色不如帰 from Tokyo, Japan has been awarded the “1 Michelin Star” status in the Tokyo Michelin Guide 2019.

The ramen eatery also has a Singapore outpost called “Konjiki Hototogisu” located at CHIJMES. It will also soon open a new concept at Great World City.

What stands out for Konjiki Hototogisu is that base is cooked using Hamaguri clams and pork broth, resulting in that unique clear soup with full-bodied flavour. 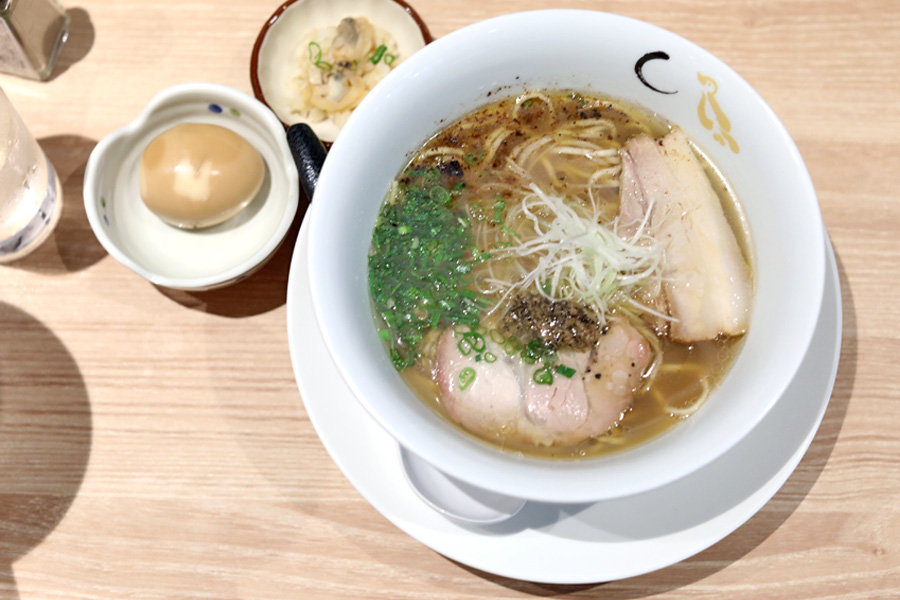 Konjiki Hototogisu, founded in 2006 by Chef Atsushi Yamamoto in Tokyo, was a small 8-seater shop awarded the Michelin Bib Gourmand title consecutively from 2015 to 2018. It finally go the star in 2019. (The other two starred ramen eateries in Tokyo are Tsuta 蔦 and Nakiryu.) 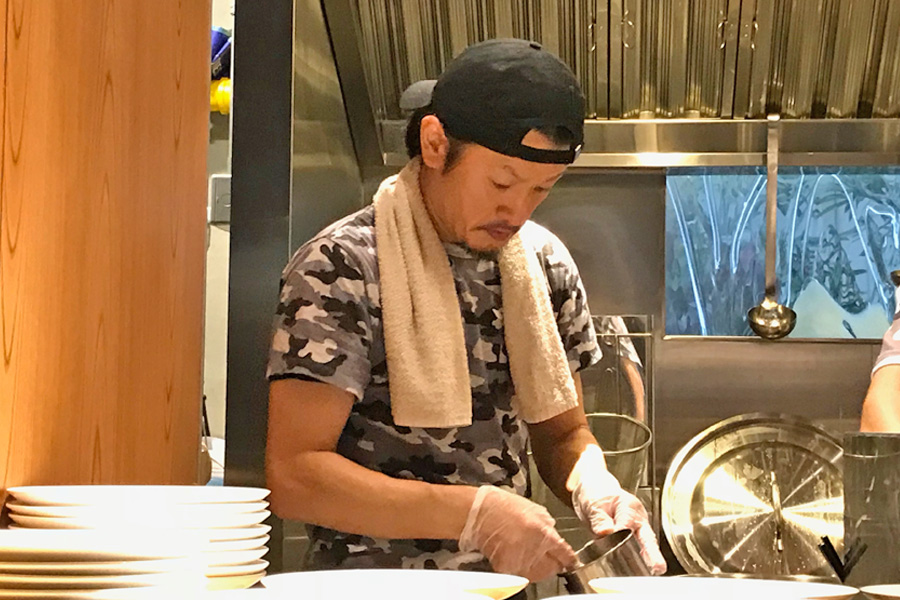 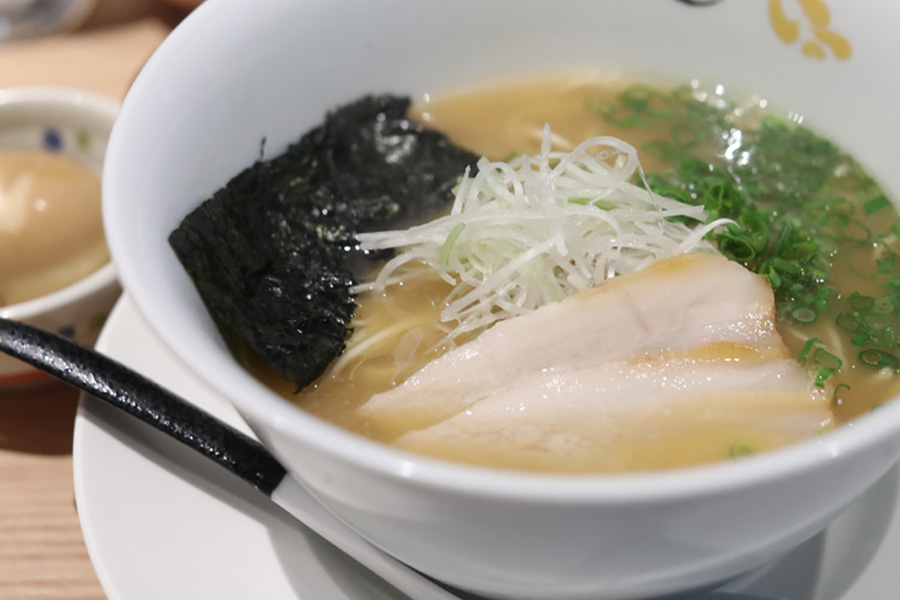 Before we get gushing all over “Michelin”, I find that sometimes the word is over-used and becomes a double-edged sword.

Many shops which are listed and recommended and not necessary starred, use “Michelin” to their advantage to imply a certain quality.

Perhaps I do sound slightly jaded, and would be frank to admit I approached this ramen shop with a skeptical mind. 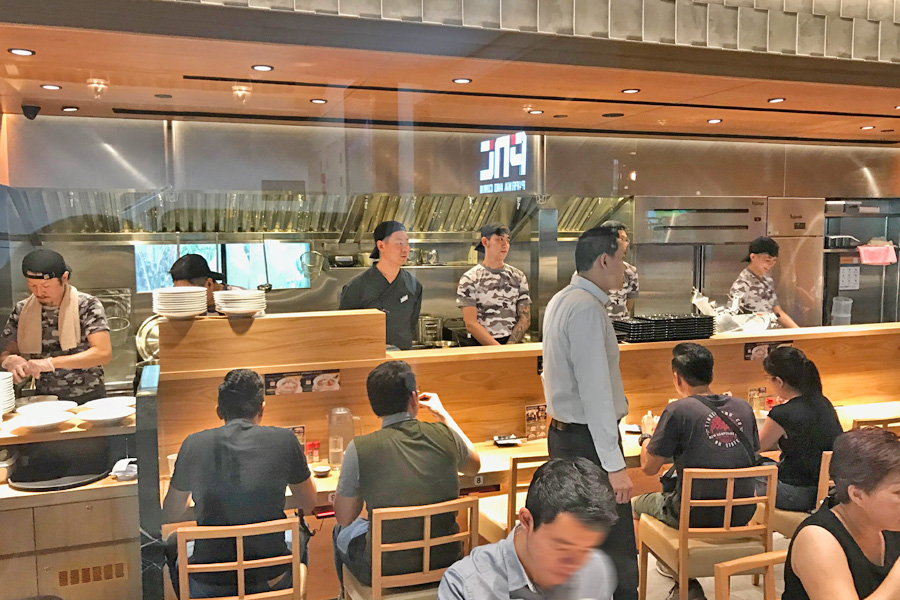 There was already a long line when I arrived at 6pm, and queued for about half an hour before getting in. 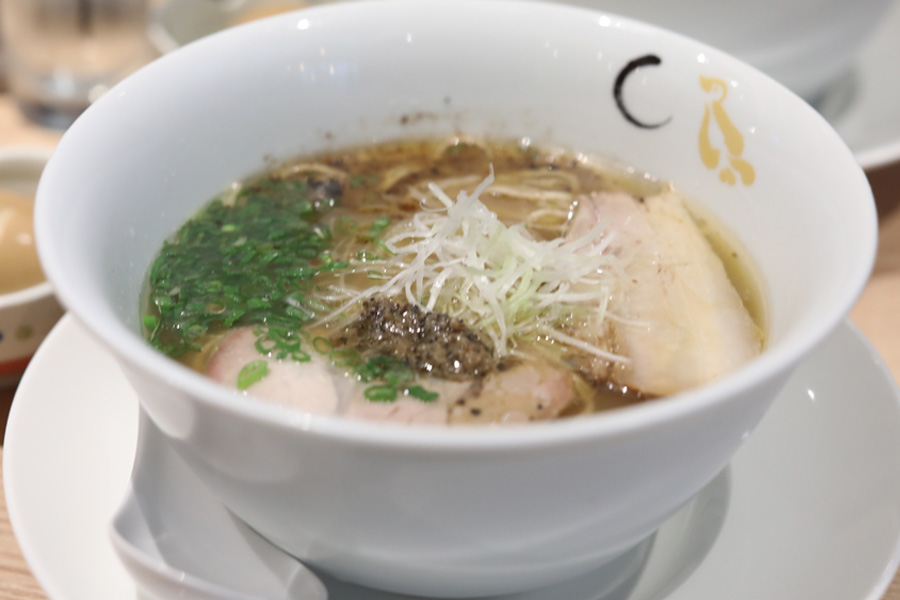 Other items such as the Shio Hamaguri ($14.90) and Tonkotsu Smoke and Pepper Ramen ($13.90) would be offered at later dates.

Chef Atsushi Yamamoto could be spotted at a corner in a fitted camo-uniform T-shirt, with focused eyes and precise movements, completing a crucial step of the ramen cooking. 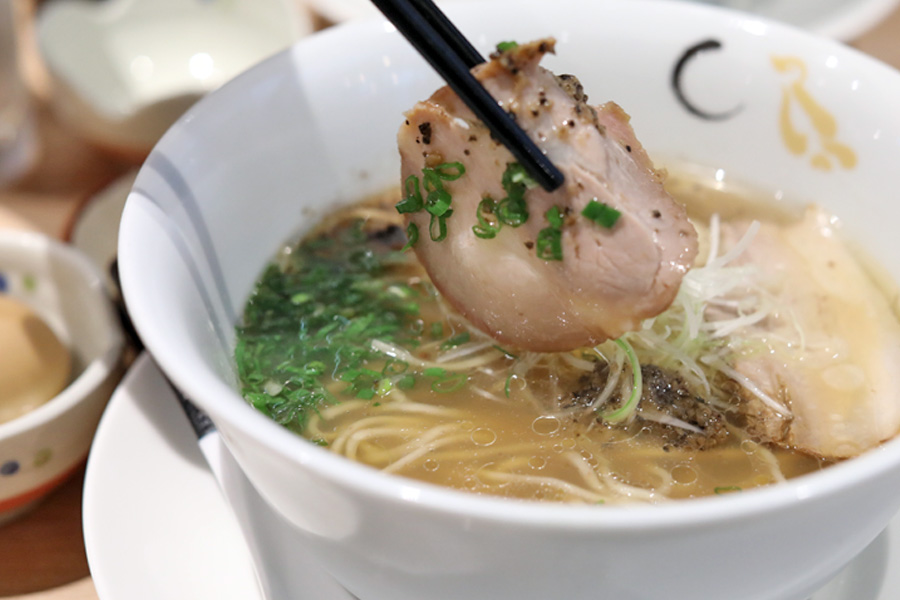 And oh, the Shoyu Hamaguri Soup Ramen went beyond my expectations.

The bowl contained Sous Vide Cha Shu and Thick Belly Cha Shu, both thin and were perhaps less consequential than the soup base garnished with black truffle pasta, porcini oil and porcini flakes. 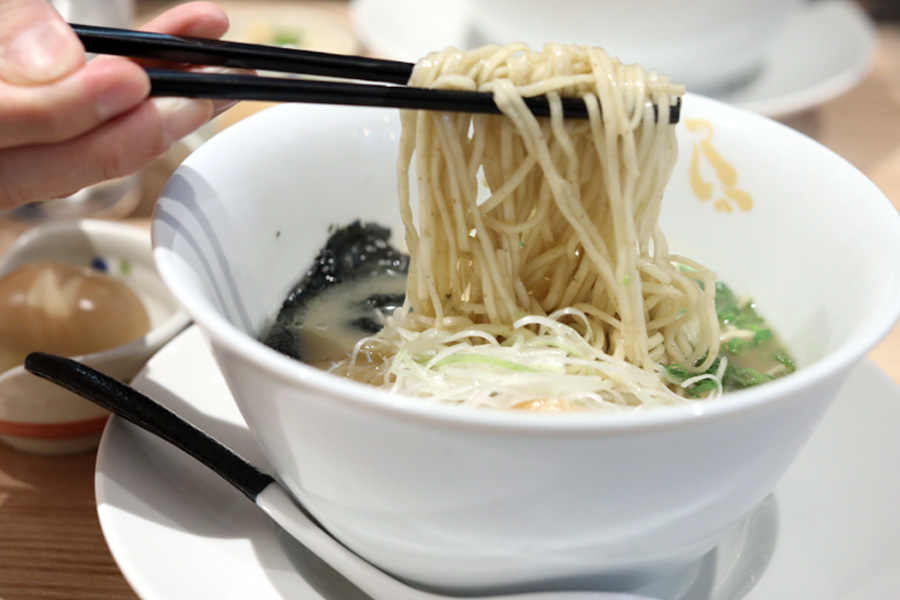 While the broth might look clear and unintimidating, it had a complex layered yet harmonising flavour which was extremely comforting.

The truffle doesn’t hit you like it screams for attention, but comes across delicately and subtlety.

Also, the soup was hot – the right kind of temperate hot, and not lukewarm like what many other ramen stores in Singapore offer (Sorry.) 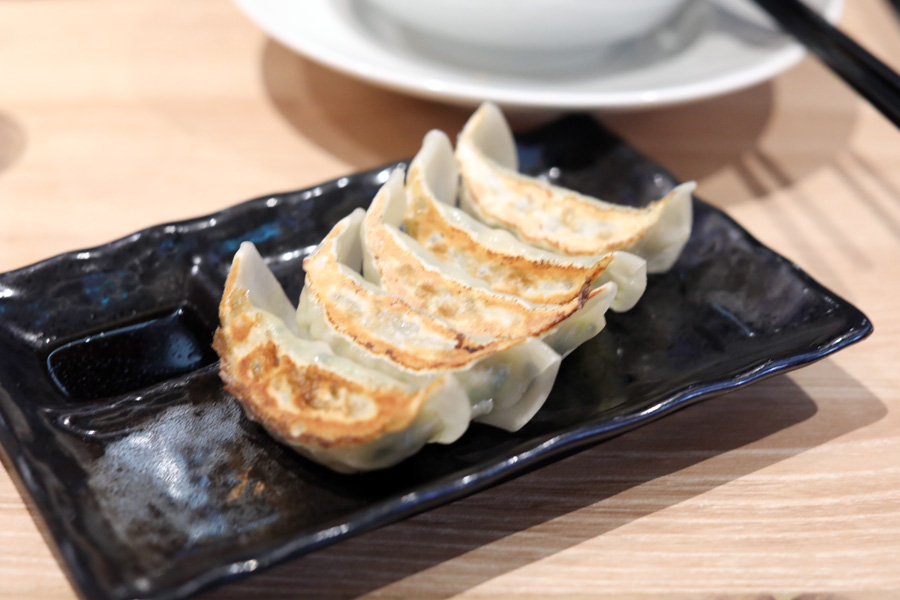 The two areas I thought could have been improved were the Egg – expensive at $2 and tasted rather unmarinated despite being brown in appearance; and that the soy sauce base could be rich and distracts from the sweetness of the clams.

It reminded me of the bowls at Tsuta and Kanshoku Ramen Bar.

A friend cornered me to an answer, and I replied ”One point higher than Tsuta’s”. At least the last bowl I had. 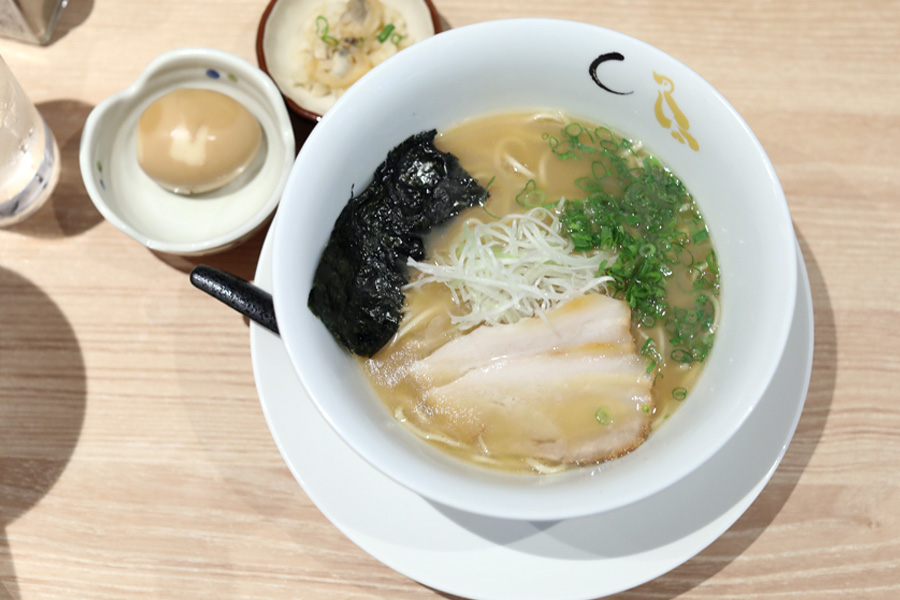 While Singapore diners generally prefer Tonkotsu Ramen ($13.90), this version was not the rich and creamy type, lighter than the average.

Okay. So surprisingly good bowl of ramen, that is not Tonkotsu.

My next worry? If standards can still be consistent if Chef Yamamoto is not around in the local store. We shall see. 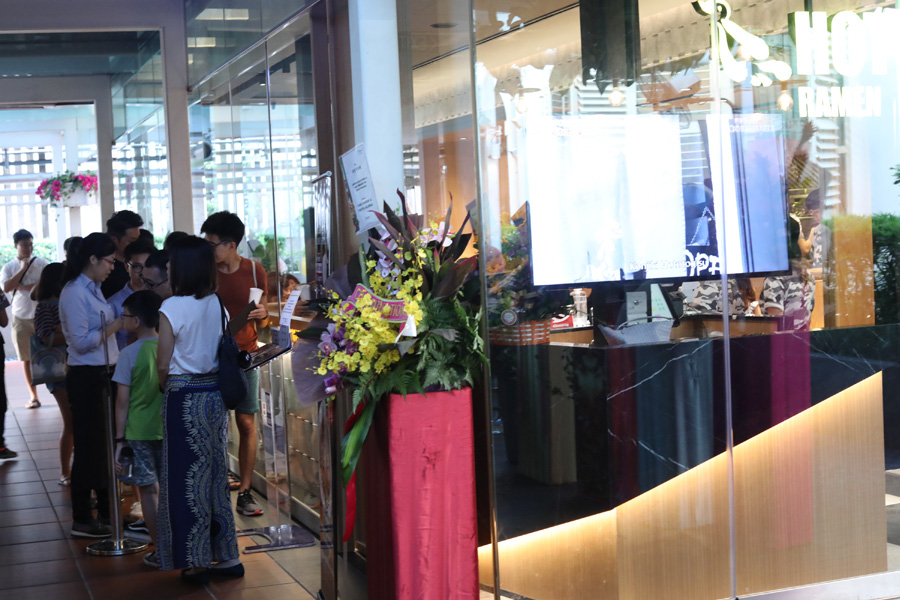